IIPI and WIPO Co-host Copyright Event on the Hill 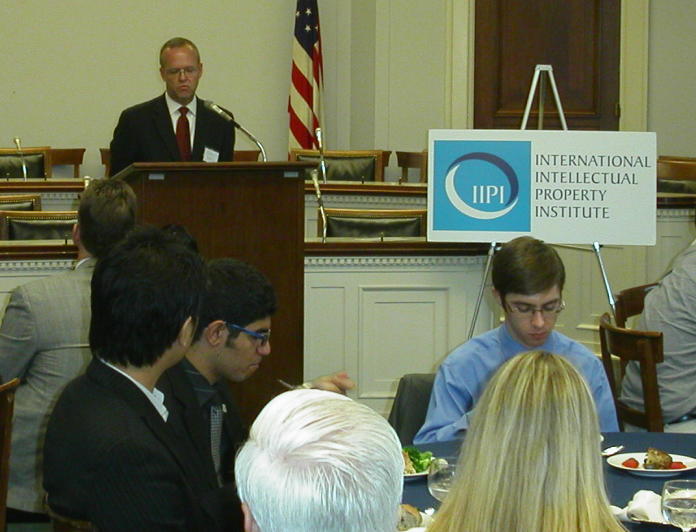 Washington, DC. The International Intellectual Property Institute (IIPI) and the World Intellectual Property Organization (WIPO) co-hosted an informative luncheon for Congress people and their staff on international copyright law, piracy prevention, and the United States’ copyright policies on Friday, July 14, 2006. The luncheon, entitled Copyright Policy and Enforcement: A WIPO Update, covered a range of topics, from the Broadcasting / Webcasting treaty which is now under discussion on the international platform to WIPO’s development agenda. Both IIPI and WIPO extended their thanks to the event’s sponsors, The Motion Picture Association of America, The National Association of Broadcasters, and The Recording Industry Association of America.

IIPI’s Chairman Bruce Lehman introduced Richard Owens, the Director of the Copyright, E-Commerce, Technology and Management Division of WIPO in Geneva. With his American audience in mind, Mr. Owens focused on WIPO’s international anti-piracy efforts and the deleterious effects copyright piracy has had on a range of socioeconomic levels. Mr. Owens also discussed WIPO’s Digital Agenda, including its copyright policy in the information society, touching on WIPO’s updates on the WIPO Copyright Treaty (WCT) and the WIPO Performances and Phonograms Treaty (WPPT) of 1996. The Webcasting Treaty, currently under scrutiny and in discussion, is very controversial in the international arena. Whether the Treaty should function as purely a signal theft tool or whether it should address both allowances and prohibitions is one of the most controversial aspects amongst States that are interested in implementing it. Other hotly-debated areas are the length of the transfer-of-rights term and the legal definitions of “webcast,” “broadcast” and “simulcast.”

In the realm of music and copyright, Mr. Owens laid out some of the primary differences between European music rights and American rights and how these differences affect the various jurisdictions’ attitudes towards a possible Webcasting Treaty. With regard to licensing, Mr. Owens made note of some of WIPO’s joint efforts with Interpol, United States Customs and he also made mention of WIPO’s upcoming global enforcement conference in September which will provide a platform for robust discussion. Mr. Owens ended the session with an open forum for questions.