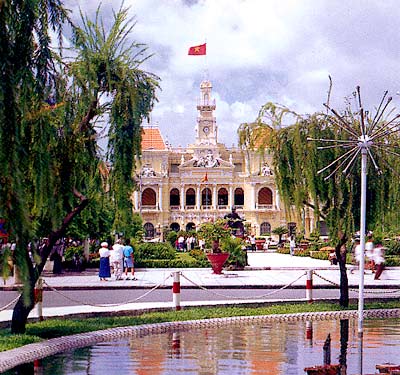 Bennett Lincoff makes remarks during a workshop with the Supreme People’s Court.

The workshops, attended by numerous judges of the Civil, Administrative and Economic Divisions of the Supreme People’s Court, as well as representatives from the Ministry of Justice, were dedicated to legal and institutional arrangements for the resolution of IP disputes. Topics included the use of criminal, administrative and civil proceedings, burdens of proof, default and summary judgments, and scope of review on appeal. Also addressed were civil remedies for IP infringement, including injunctive and monetary relief, the calculation of damages, and enforcement of judgments.

Lincoff also spent several days consulting with the management of the newly formed Vietnam Copyright Centre in Hanoi. Lincoff advised the Vietnamese leadership on how to establish an organization to license public performances of copyrighted musical works, including the setting of license fees, the monitoring and documentation of performances, and methodologies for the distribution of royalties to those copyright owners whose music was performed by licensees of the Centre.

Members of the STAR-IIPI-SPC team pause to smile after a workshop.

“Collecting fees for public performances is essential to the survival of the music industry in Vietnam,” says Lincoff. “Composers simply can not survive financially if they are unable to license performances of their works.”

Lincoff, formerly the Director of Legal Affair for New Media for the American Society of Composers, Authors and Publishers (ASCAP), says the Copyright Centre has had some success in licensing and collecting fees for the use of its members’ music in live concert performances. “In less than a year, the Copyright Centre has signed up 400 composer members and has collected modest fees from musical performances. Considering their constraints, they’re off to a good start.”

IIPI identified five priorities to help the Copyright Centre advance its mission. Goals for the 2003/2004 timeframe include:

• Expanding the membership base
• Identifying music users who need licenses so that their public performances will be lawful under Vietnamese law
• Negotiating license agreements with targeted groups of music users
• Affiliating with foreign performance rights societies
• Establishing “transparent” procedures to assure domestic members and foreign interests of the Center’s credibility.

IIPI’s recent effort is a follow-up to training workshops conducted in Hanoi and Ho Chi Minh City in October of 2002. Those workshops were coordinated by STAR-Vietnam, a USAID-funded initiative devoted to assisting Vietnam in meeting its obligations under the Bi-lateral Trade Agreement (BTA). The recently adopted Vietnam-U.S. Bilateral Trade Agreement (BTA) requires TRIPS-level protection for U.S. intellectual property. The United States is committed to provide training and assistance to Vietnam to enable it to meets its obligations under the BTA.