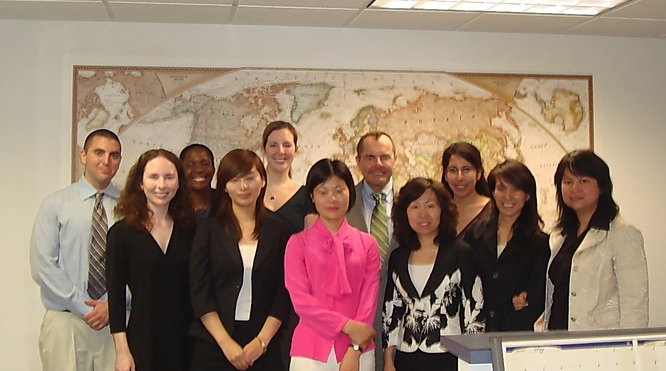 Washington, DC. IIPI welcomed a delegation of Chinese officials from the China International Electronic Commerce Center (CIECC) and from the Suzhou Copyright Bureau. The purpose of the meeting, organized by the US Department of State, was to exchange views on intellectual property policy and learn from each other with regard to programs that each organization has undertaken to enhance their constituencies’ knowledge of intellectual property and the importance of its effective enforcement. IIPI’s mission, to help developing countries learn how to benefit from their implementation of IP laws, was explained in the context of China’s adhesion to such international treaties as the Agreement on the Trade-Related Aspects of Intellectual Property Rights (TRIPS Agreement) that came from the Uruguay Round of the World Trade Organization.

Bruce Lehman, IIPI’s Chairman and the former head of the United States Patent and Trademark Office, provided the delegation with his perspective of China’s place on the international trade arena. China has a fairly mixed situation currently with regard to its treatment of intellectual property. As some sophisticated corporations are more and more concerned with the protection of the IP they produce and foster, China’s challenge is to develop a comprehensive IP system that addresses counterfeiting and piracy. To illustrate the difference between a commodity economy and a “knowledge” economy, Mr. Lehman offered the example of the Apple iPod. The iPod uses technology that was developed in Europe. Apple Corporation, in California, licenses and packages that technology for commercialization but the iPod itself is manufactured in China. It is the management of the iPod’s intellectual property that generates revenue.

The Chinese delegates recognized the importance of intellectual property and reported a much higher incidence of public awareness and compliance now than even a few years ago. There is an IP Taskforce in China, for example, that is comprised of seventeen different federal agencies that work together to promote education and practical help on IP issues. Following a helpful exchange of ideas and institutional information, the delegates expressed interest in working with IIPI in the future.